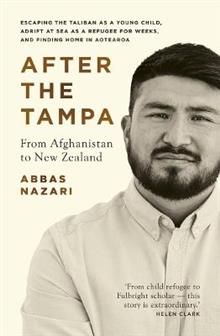 Escaping from Taliban persecution in Afghanistan, Abbas Nazari's parents fled the country in 2001 to find a safe place in which to bring up their five children. Their six-month journey through Pakistan and Indonesia searching for asylum culminated in being crammed onto a small fishing boat with 426 other asylum seekers. When that boat started to sink in the Indian Ocean, they were mercifully rescued by a Norwegian cargo boat, the Tampa. The Tampa owners expected to deliver the refugees to Australia but were told they were not welcome there. This sparked an international incident between Australia, Norway and Indonesia over responsibility for these people, leaving them stranded on the boat and eventually being sent to Nauru Island. New Zealand offered to take 150 of them, including Abbas and his family. It's now 20 years since this happened and Abbas tells his story, from the Taliban's horrendous rule in Afghanistan to his family's desperate search for safety to how this became an international political hot issue to settling and growing up in far-off New Zealand. It's also the story of the other children and families who were resettled here.